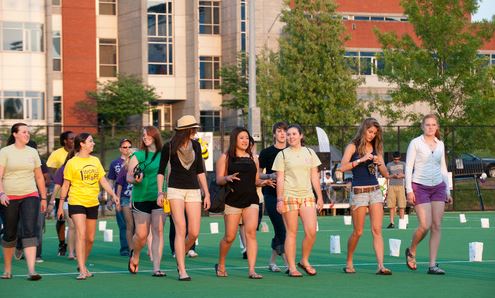 What is the Jeanne Clery Act?

The Jeanne Clery Act is named in memory of 19-year-old Jeanne Ann Clery, a Lehigh University freshman who was raped and murdered in her residence hall room on April 5, 1986. Jeanne’s parents, Connie and Howard, learned that Lehigh University students had not been informed of the 38 violent crimes that occurred on the Lehigh campus in the three years before her murder. They eventually persuaded Congress to enact a law that would help mitigate future tragedies. The Clery Act is a consumer protection law that aims to provide transparency around campus crime policy and statistics.

What does Georgia Tech have to disclose under the Clery Act?

What are the ‘Clery Act crimes’ that must be disclosed?

Which schools must comply with the Clery Act?

All institutions of postsecondary education, both public and private, that participate in federal student aid programs (via Title IV) must comply with the Clery Act.

Is there anyone on campus I can report a crime to confidentially?

What is the difference between a "Timely Warning" and an "Emergency Notification"?

Do school officials other than law enforcement have reporting obligations under the Clery Act?

Will reporting a crime/incident to a CSA mean the police will get involved?

Not necessarily. Although we strongly encourage victims of any crime to seek assistance from law enforcement whenever possible, a report from a CSA will not necessarily result in a police investigation. There are many reasons why a report might not result in a law enforcement action. For example, in many cases the Police Department cannot initiate an investigation without victim assistance. As another example, if a report is about an incident that occurred outside of the Georgia Tech Police Department’s jurisdiction, the matter would be referred the matter to the authority having jurisdiction.

How are hate crimes classified?

How is data recorded temporally?

Each incident is recorded in the calendar year it was reported – not in the year it occurred.

Are there other violations that must be included in the report?

Where does the Clery Act say these crimes must occur in order for them to be disclosed?

Does someone have to be convicted of a crime before it is reportable under the Clery Act?

No. Crimes are counted when they are reported regardless of prosecution.

Who enforces the Jeanne Clery Act and what are the penalties for noncompliance?

The United States Department of Education is tasked with enforcing the Jeanne Clery Act and may level civil penalties against institutions of higher education up to $35,000.00 per violation or may suspend them from participating in federal student financial aid programs.